Every year a hand full of enthusiastic scuba divers will book onto one of these extraordinary Far Northern Scuba Diving Expeditions Australia. Travellers will scuba dive the furthest Northern parts of the Great Barrier Reef in Australia over 7 days. Typically departing Cairns on a Monday & Returning to Cairns on Monday.

Cairns has an international and domestic airport making it easy for divers to arrive and depart before and after the expedition. The below photos have been supplied from Spirit of Freedoms Far Northern Scuba Diving Expedition last year. 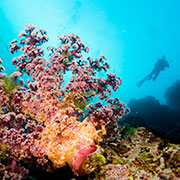 Generally, the only people that get to see or visit these Far Northern dive sites are marine scientists and explorers. But, over the past few years livaboard dive boat operators from Cairns have created custom built 7-day liveaboard itineraries to access these remote untouched waters of the Great Barrier Reef. Places like Rainer Island typically are off-site for humans. Nicknamed no man’s land, typically no people or human activity are allowed here (Except Marine Scientists). This Island is regarded as the largest turtle breeding island in the World. Far North Dive Expeditions make a stop here, a very lucky opportunity for anyone on board.

Scuba divers are blessed with remote untouched scuba diving, exploring pristine coral reefs as the skipper leads the vessel into un-charted waters. These Far Northern Scuba Diving Expeditions take you deep into the wild side of the Great Barrier Reef. Typically, scuba divers need to have their advanced diver certification level or higher. It is highly recommended to take out dive travel insurance to cover any cost of evacuation and or decompression chamber fees. Although these events are kept to a very minimum, it does pay to protect yourself just in case of an emergency.

Often the boat will contain a mix or dive enthusiast, marine scientists and moderate to highly experienced scuba divers. Expect like-minded fellow scuba divers with an appreciation for the sport of scuba diving, marine life and the sense of adventure exploring the largest reef system on Earth.

Operating for only a short 4-week period out of the entire year, these Far Northern Scuba Diving Expeditions generally need to be booked at least 6 months in advance.

If you are interested in one of these Far Northern Scuba Diving Expeditions contact our dive reservation team at reservations@cairnsdiveadventures.com or give us a call over the phone: + 61 7 40411638.